I have a confession to make...I used to be a beer snob. Until I moved to Costa Rica roughly 6 years ago, I only drank beers with prestigious names like Stella Artois, Newcastle, and Becks or micro-brews such as Pete's Wicked Ale, Palmetto Amber and Sierre Nevada Pale Ale. All that changed when I arrived in Costa Rica as selection is somewhat limited and imported beers are very expensive. The two beers most people drink in Costa Rica are Pilsen and Imperial, but names like Bavaria, Golden Monkey and a few others are gaining in popularity. A few months ago two of my local watering holes, Roadhouse and Tortilla Flats, started carrying a beer from the first micro-brewery in Costa Rica called Craft Brewing. My favorite beer that Craft Brewing makes is called La Segua.  I was excited to see a new beer option, especially one that was from a local micro-brew, so I ordered one, and started to take a swig. A Tico (name for native Costa Rican) was sitting nearby and asked to look at the bottle. He handed it back to me and said, "Do you know the legend of La Segua?" No, I said.  He gave me a weird look and said "be careful and don't drink too many of those or La Segua will get you" as he headed out the door without looking back. In addition to being a beer snob, I am a curious creature, so I took out my phone and typed La Segua into Google. 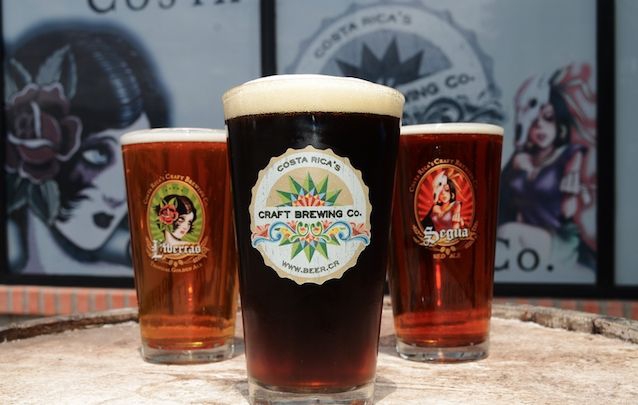 Through my Google search I found that La Segua is possibly the most famous legend in Costa Rica. The story starts in colonial Cartago at a time when the population was a near equal mix of  indigenous Indians and people of Spanish descent. Today indigenous Indians make up less than 2% of the population. A beautiful Indian woman with perfect skin and long dark hair fell in love with a Spanish soldier stationed in the area. They had a torrid sexual affair until the soldier betrayed her love and left Cartago without explanation. The woman was distraught because she had lost her love and betrayed her family. (At this time it was forbidden for the indigenous to mix with the Spanish) A powerful curse fell on her turning her into La Segua.
Like the woman, La Segua is beautiful with dark eyes, curly hair and an angelic voice. La Segua reminds me of the Sirens of Greek Mythology . The Sirens would use their beautiful voices and gorgeous forms to lure sailors close to their island where the ship would become shipwrecked and the crew stuck. La Segua is unique in that she serves as a warning to women not to be promiscuous, yet she also protects women from womanizers and the public from drunk men who are out on the town looking for trouble.  Legend has it that she waits in the middle of dark street for her victims to pass by. They first hear her song, which lulls them into a state of relaxation, then they see her beauty, which draws them closer, and stimulates their desire. As men approach her, she tells them that she is tired, hungry and would be grateful if she could get a ride home. Her victims, being men of prey who have little respect for women, see an opportunity to fulfill their carnal desires and are more than willing to help this 'vulnerable' enchantress. As they ride home (on horseback in older version and in cars in newer ones) La Segua engages her soon to be victim in conversation and in most versions, asks for a cigarette. When the  men turn around to gaze upon her beautiful face they see it  suddenly turn into a bloody and bony horse head with fire coming out of the eyes. She opens her mouth to show yellow horse teeth where a beautiful voice rang out just seconds before. The site is so monstrous it causes men to freeze with fright and in extreme cases die. The men that live to tell the tale are always changed. They stop their womanizing ways, become better husband, lovers and fathers that spend more time at home than out on the streets of Costa Rica causing trouble.
Men, the only way to make sure La Segua isn't waiting on the roadside for you is to be a gentlemen to the ladies of Costa Rica. Ladies, La Segua also serves to remind you that actions have consequences. Enjoy Costa Rica responsibly.
Written by:
PUBLISHED: Jun 9th 2017