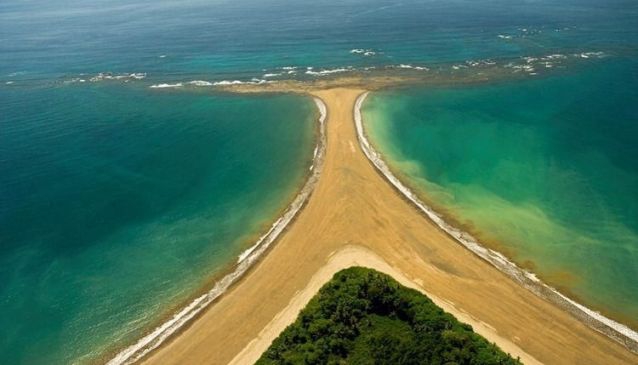 Uvita is one of the fastest growing towns in Costa Ballena. The quaint town has most of the infrastructure found in the larger Costa Rican cities and is found right off the main highway. The vibrant town has seen tremendous growth in the last few years with the addition of banks, large grocery stores and numerous amenities such as restaurants, hotels and shops. The town sits in a large valley that is surrounded by the Uvita River and Playa Hermosa to the north, Marino Ballena National Park and the Pacific Ocean to the west, and a sublime mountain range to the south and east. A large number of Expats have moved to the area over the last few years. After you spend a day or two in Uvita, you will see why it is one of the hottest real estate markets in Costa Rica.

When visiting Uvita you are likely to notice that many businesses use the word Ballena in their names. Bungalows Ballena, Marino Ballena Restaurant, Casa Cola Ballena, are just a few examples of this. You will also notice that many of the natural landmarks around Uvita contain the word also. A few examples are Marino Ballena National Park, Isla Ballena, The Whale's Tail or Cola de Ballena. Ballena (bah-yay-nah)  is the Spanish word for whale. Each year the warm tropical waters around Uvita come alive from December to March and again from June through November with whales visiting from both hemispheres. This is the reason you see the word Ballena used so much in the area.

You can easily spend a month in Uvita running around exploring waterfalls, walking beaches, surfing and going on tours. Some of the most popular activities are enjoyed by boat. Scuba diving at Cano Island or snorkeling in Drake Bay, fishing for a world record sailfish or just watching for whales and dolphins are all options to be enjoyed on the water. Tour companies offer everything from zip-lining to canyoning and from kayaking to birding. The options are virtually endless.