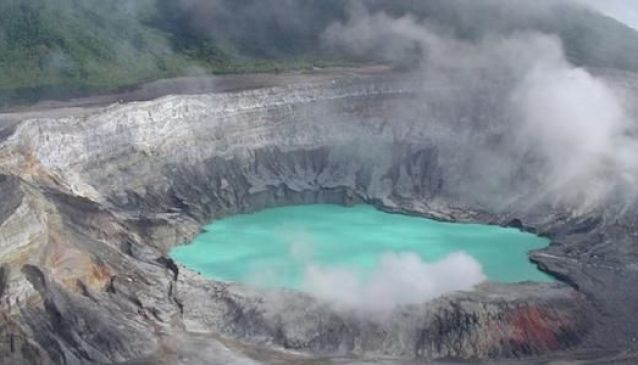 Forty miles north of San Jose lays the amazing Poas Volcano National Park,  a glorious display of geothermal activity that helped form Costa Rica long ago.  In between clouds of steam, mist and shooting geysers the visitors to this park can see the old lava flows frozen in time, and the world's largest active crater.  The colorful summit craters are a popular attraction and can be reached by vehicles instead of a lengthy walk to park stations.

Poas is another stratovolcano that lies between to large calderas.  The southern crater contains a crystal clear lake called Botos which holds cold waters and has not erupted for many decades.  The northern crater contains warm, acidic water and erupts with geyserlike displays of water from the lake periodically but had not had a major eruption since the 1950's until it woke up again in February of 2015.

Bring warm clothing when visiting the park as at these altitudes the temperatures often fall close to freezing.  There are three trails that are short and an easy hike for almost all family members  and the perfect setting to obtain some great pictures to carry home. On the lower slopes of Poas, you will find an array of fruit and floral farms, mild temperatures and grazing cattle.  There is a modern visitor center and museum with exhibits that detail the geothermal activity of this amazing force of nature.  No accommodations or camping are allowed in the park at this time.