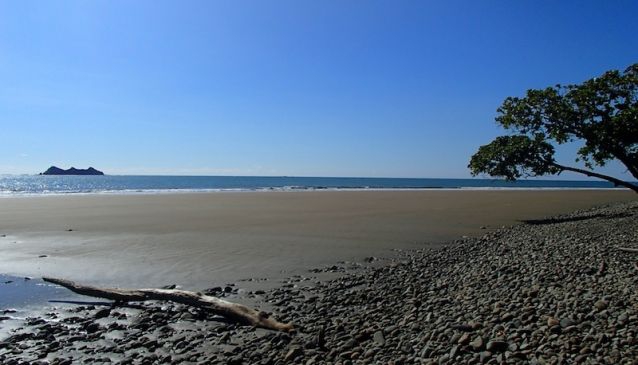 Located just south of Dominical, Marino Ballena National Park gets its name from the whales (ballenas) that visit its waters every year. The humpback whales come in large pods all but three months a year to breed in the warm waters. Taking one of the local boat tours gives visitors a close encounter with these magnificent creatures as well as offering views of the mountains dropping into the sea from an ocean perspective. Local surfers often see whales as they are waiting on the next swell while others spot them from the porches of nearby homes overlooking the park.

The park includes a well known landmark known as the 'Whale Tail' which is a spit of land that resembles an actual whales tail from above because of rocks and the constant wave action. The Whale Tail is one of the largest natural sand bars in the western hemisphere. To fully appreciate it, we recommend taking the 2 kilometer long walk onto the 'tail' during a low tide. After the earthquake and tsunami that rocked Japan, the Whale Tail was slightly altered in form. Some of the sand between the tombolo and the rock islands was washed out. The sand has been filling in at a steady pace and we hope to see it fully connected soon. UPDATE !!! The Whales Tail is back to its normal shape. The sand is connected all the way to the rock formation. This is excellent news!

There are also two islands just off shore named Las Tres Hermanas (The Three Sisters) and Isla Ballena (Whale Island). The reefs and natural coral in Marino Ballena National Park make for excellent snorkeling and diving which can be enjoyed year round. Camping is allowed on designated parts of the beach, but petty crime is rampant here so watch your stuff and never leave it unattended. If you are searching for budget accommodations, consider the Flutterby House which is located just a few hundred meters from the beach. If you are looking for an upscale hotel try Crystal Ballena or Cuna del Angel. There are several other choices including cabins, hotels, and eco-lodges in Uvita, Bahia, and Dominical